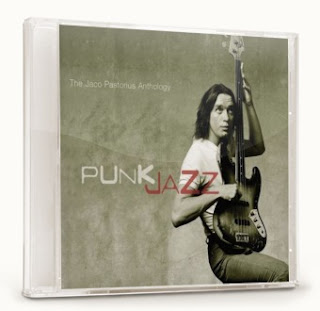 Jaco Pastorious revolutionized the way the electric bass could be played. No one before him had the technique, and a new sound that ranged from percussive to distinctively expressive. He accepted the role of the instrument as the bottom foundation of a musical spectrum, then added solo and accompaniment styles that made the bass guitar as fully a musical instrument as any guitar, keyboard, or reed contrivance. Nobody utilized the entire range of the instrument as he did. He could go from rapid single note articulations to full chords and harmonic clusters in a snap, always with a sound that could be mistaken for no other.

He ruled, if anybody did in this world. Then he ran into personal problems, died tragically, and all we have left are the recordings. Much of the choice stuff can be found on Rhino’s two-CD set Punk Jazz: The Jaco Pastorious Anthology.

Now I can’t help feeling that some of the excerpts deserved to be heard in the context of complete albums—the Albert Mangelsdorf, the early Pat Metheny album, the first Jaco solo album, the wonderful collaborations with Joni Mitchell. But if for whatever reason you only want one example, this is probably will do it. The set covers his entire (short) career, from the first r&b recordings through Weather Report and on to his later big band recordings. The very first and very last things aren’t always as great as the middle period, but it all represents Jaco well for his inimitable bass prowess.
Posted by Grego Applegate Edwards at 6:05 AM