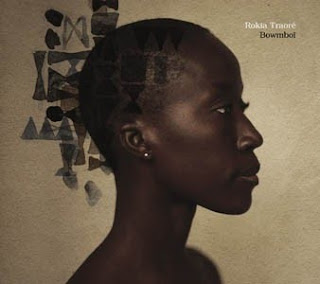 If you go to a bricks and mortar CD store and they are thorough enough to have a bin dubbed “Africa,” you are likely to find almost anything, from traditional tribal to slick “world music” releases veering on disco at their worst. It makes sense though. If you were in an African store and looked in a bin labeled “USA,” what consistency would you expect to find at that level?

Be that as it may, if you found the CD Brownboi (Nonesuch-Tama) in that African bin, you would have an offering by female singer Rokia Traore that straddles the fence between tradition and modern in a way that does not lose the continuity of possible styles in play. She sounds West African; there are West African harps and the percussion has the sound of that region. As is all-too-often the case, there are no liner notes to explain what this is. No matter.

We get western strings occasionally, well arranged, a nice acoustic guitar presence, and a very good singer singing strong material. I don’t know if she is big over there or not, but this CD encourages me as far as what a modern African music can sound like. It retains the roots and adds modern colors of western derived styles without diluting the original impetus. In other words it sounds good!
Posted by Grego Applegate Edwards at 5:27 AM