"Echoes" by the California Guitar Trio 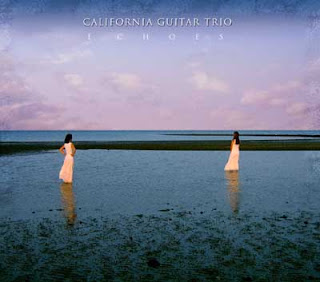 After 13 CDs under their belt, you’d think that the California Guitar Trio would have spent their musical capital and gone separate ways, as is the case with so many musical groups today. Not so. Their association with Fripp’s League of Crafty Guitarists must have given them the sort of inspiration that allows them to fashion a large repertoire of music over time. Like Fripp’s guitar ensemble, the trio deftly arranges for what is at hand, and they perform with a blend of acoustic and electric guitars that speak as one musical body.

The new release, Echoes (Inner Knot), is a rather zany, eclectic assortment of re-creations. Some examples: part of Beethoven’s Fifth (which seems unnecessary), old Pink Floyd psychedelia, the theme from “Tubular Bells,” a great old Ventures surf tune, and an arrangement of Queen’s “Bohemian Rhapsody,” which actually works out quite alright. Like the Chronos Quartet, they seem to take pleasure in combining unexpected pieces from various categories and giving them new life with clever arrangements.

That’s fine, but I’d like to see them break out of that mould and do something unique and of a piece, like a Frank Zappa extended composition rearranged for the ensemble, or something by one of the prominent minimalists. I don’t mean to be picky since the level of musicianship is high. In any event this is an enjoyable set and will appeal to anyone who wants to hear a lot of guitar in a free-ranging setting.
Posted by Grego Applegate Edwards at 5:20 AM