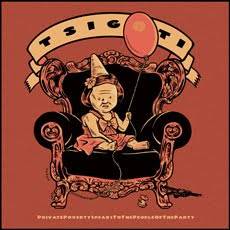 The punk-avant outfit Tsigoti hails from New York. Not surprising. One might have trouble picturing this group making their way playing strip malls in South Dakota. They are brash, insistent. They have a political agenda that assuredly does not correspond to what Dick Cheney would like to embrace. I don't imagine that Tsigoti's first album Private Poverty Speaks (ESP) would find its way onto his CD player very often.

ESP in halcyon days was courageous in releasing rock and what-have-you far removed from the mainstream. The Fugs, The Godz and other groups supplied a bracingly toxic shock to middle America around 1965 or so, and the music world was never the same after. Will Tsigoti have a similar effect today? I don't think so.

This is a band that is first and foremost political. They are out front with a sloganeering sort of approach. This to me is a healthy sign that free speech is working in our system. On the other hand my primary concern is with music, regardless of it's content (up to a point). Otherwise I'd be listening exclusively to the Internationale or God Bless America. Actually neither.

So what of the music? It's punky and outside the norm. The band features a beat up piano, guitars, bass and drums and the sort of raw punkish vocals that have been a part of the scene for a long time. I'll be honest. Some of it falls flat musically. Instead of a cannonball, you get a belly flop. On the other hand there are some very interesting moments. If you like a raw punk sound, this will seem familiar and yet not. It's post-punk in that it does not have a much thrashing in its foundations. There are some adventures in store for the listener. I doubt if anybody would like all of this. Some will like none of it. There's a solid ten minutes of good stuff here, to my ears. That's basically my take on it.

Posted by Grego Applegate Edwards at 4:29 AM