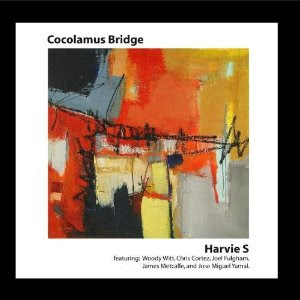 Today marks posting number 401. That means that between this and my two other sites, plus Cadence, I've reviewed well over 1000 CDs in the last couple of years. Am I tired? It's Monday morning; otherwise, not tired.

Acoustic bassist Harvie S has been doing a marathon of his own. He can claim more than 350 CDs that he has been a part of, as bassist, as co-leader, as leader. Of course there's always a reason for such things. He can play! And he can play with all kinds of people, whether it be Kenny Barron, James Brown, or Jane Ira Bloom.

And when he gets a chance to play his own music, it means that that much more of his playing prowess is out front, as are his writing and leadership abilities. Cocolamus Bridge (Blue Bamboo 014), his latest, gives you all of that. The sextet assembled for this date has range and some drive. Guitarist Chris Cortez plays jazz guitar with a capital /J/. He's the sort that can give out with some nice lines seemingly whenever called upon to do so. Tenor-soprano Woody Witt is another one that plays the current mainstream style with flair. Jose Miguel Yamal gives you some impeccable Latin piano. Joel Fulgham and James Metcalfe, drums and percussion, particularly get popping on the Latin numbers as well. There's a decent assortment of Latin originals, some fine showcases for Harvie's bass soloing (most notably on the opening traditional folk song "Eili Gheal Chiuin"), and an interesting bass and soprano version of Wayne Shorter's "Night Dreamer."

This is an album acoustic bass aficionados will enjoy for the nuances of Harvie S's versatile approach. Those who dig Latin jazz of a cooking sort yet with a somewhat cool edge at times will also get with this one.
Posted by Grego Applegate Edwards at 3:59 AM