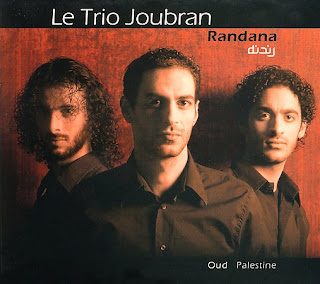 The wheel of time does not stop turning for any of us here on planet earth. In the case of cultures with a long musical tradition, such as the Mideast, that may sometimes be cause for regret. Bad disco as done by any of the world's peoples is still bad disco, no matter if there are traditional elements incorporated or not. We all know from experience that change is neither bad nor good. It all depends.

With this in mind I contemplate Le Trio Joubran, a trio of oud players, and their CD Randana (World Village 479031). If this is change, and it is, it is good change. All three are masters of the art of oud playing and the ensemble music they create is compelling, stunning, superb. They tune in the traditional manner (meaning they use Mideastern scalular tunings that slightly flat or sharp notes according to the way it has been done for many centuries); they use traditional Mideastern tonal modalities; and some of the music sounds traditional. Their compositional palette is contemporary for the most part. But it extends the tradition. They are the advanced scouts on the road of Mideastern art music of the future. It is haunting and beautiful.

This was the first album of the Joubran Brothers as a trio. It was originally released abroad in 1995. Anyone who is interested in the oud tradition cannot afford to miss it. On the other hand even if you are not familiar with the musical lifeways of the region, you should hear Le Trio Joubran.

Music heals wounds; music brings all peoples together. Music is the best answer I can give to those who seek to divide and conquer. But not just any music. Music like this. Highly recommended.
Posted by Grego Applegate Edwards at 3:57 AM