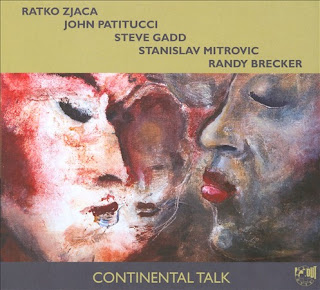 Another guitarist you may not know by name: one Ratko Zjaca, a Croatian practitioner of the plectral arts. For his album Continental Talk (In & Out 07588) he assembles a worthy gathering of Randy Brecker on trumpet, Stanislav Mitrovic on tenor and soprano, John Patitucci on acoustic bass, and drummer stalwart Steve Gadd. They congregate around the microphones for a nice set of Zjaca originals, modern jazz of the straight-ahead sort. The songs and their changes go from simple blowing tunes to more sophisticated items, melodically and sometimes harmonically speaking.

Everyone sounds quite good. Ratko can play a ravishing, changes-based solo with mellow chordal voicings and lines of good provinence. Or he can crank out bluesy pentatonic sorts of things, especially on the rock tinged numbers. They can get into a rather advanced rhythmic and harmonic world, as in "Inner Ears." But when it comes to the soloing Ratko sticks mostly to the soulful post-Benson lines with a few odd ravishing chords here and there.

Mr. Zjaca is a fine guitarist, surely. The twelve numbers on this set give ample evidence. It is a most pleasant listen. Sometimes even more than that. Thank you Ratko.
Posted by Grego Applegate Edwards at 3:57 AM