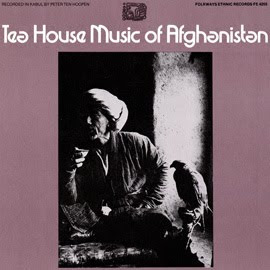 If you are reading this blog, I would assume that you are not the sort of person who would advocate banning all music. Such people, duh, are by definition my enemies. Fundamentalists like the Taliban, if they had their way, would probably put all musicians on the chopping block. It’s a long story about overly literal readings of texts holy to those that believe in what is professed there. And that’s the story of most Fundamentalists of whatever stripe. The readings I mean—but banning music of certain or all types too sometimes, as can be seen in history—in the West, in America even.

So when I turn to a Folkways recording of The Tea House Music of Afghanistan, (which you can download or buy as a CD at the Smithsonian-Folkways website), I feel there’s more at stake than the pleasure of listening to a music that to most is unfamiliar. The incredibly long history of Afghan culture is rich with interactions of various nationalities and syntheses of what was learned, transformed, reinvented and subjected to re-interpretation by the pre-existing beliefs and practices of the local people. The music is no exception.

This 1969 recording features mid-sized ensembles of strings, drums, sometimes winds, and a vocalist. You can hear Indian, Persian, Arabic-Semitic and other elements, but no, it’s not some crazy-quilt pastiche of sounds and melodic strains. It is superbly itself. Is such music worth fighting for? In the name of music, how could it not be? Buy this recording and you’ll be indirectly supporting these musicians—and perhaps all musicians.

Posted originally on March 13, 2009 at www.gapplegate.com/musicalblog.htm
Posted by Grego Applegate Edwards at 5:09 AM