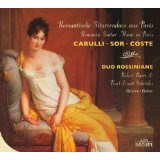 The romantic chamber repertoire has of course many masterpieces to savor. Now if you just read this blog because you are interested in guitar you might be asking, "huh?" Trust me, OK? My problem when you get to the high romantics such as Schumann and Brahms is that the level of expression can be so intense, especially in the hands of some chamber outfits of the last century, that it can seem a bit overdone. It's perhaps more expressive than it need be, given the musical content involved. Now that is only on occasion, mind you.

You aren't going to find that phenomenon on Duo Rossiniane's Romantic Guitar Music in Paris (Ars Musici 232420). First of all the duo consists of Robert Barto and Karl-Ernst Schroeder on classical guitars. They play nicely understated expressive music in nicely understated ways. Second the duo pieces by Carulli, Sor and Coste rather sound vaguely more classical than romantic, or more Chabrier than Schumann. These are intimate works that don't have the fire and flamboyance of classic high romanticism, perhaps not the profundity either. Some days though, you don't want profundity and then this is right there for you.

So that can be a good thing if you have need of something a little more on the reflective side. The fact is, Duo Rossiniane do a fine job bringing out the charm inherent in these works. They may not be masterpieces, but in the hands of the duo they provides a rather pleasing imaginary concert. If you are looking for some quietly elegant guitar music, this one is for you.
Posted by Grego Applegate Edwards at 4:02 AM