"What Is IT?" LA Punk Anthology 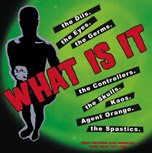 How do you evaluate punk? Not as you would a Beethoven string quartet performance! It's supposed to be kind of the opposite. It should be crude, raw, energetic and filled with a certain hostility if it's the classic sort. And that's so with the 10" EP What is It (Wondercap 07007). You get ten tracks from ten different LA punk bands spanning the years 1977-83. These were apparently issued as 7" singles (or not in two cases) on What Records during those years.

There are bands like the Germs, Agent Orange, the Eyes and the Skulls. I don't know enough about that scene to tell you the significance of those bands. All I know is the anthology gives you a good earful of the primal charm that punk can give forth with. There are various sorts of influences, from the Ramones to Lydia Lunch to surf punk (in a version of "Out of Limits"). It's fun. It's ten wonderfully numb-fingered blasts of the music at a time when it was still new. And it's a finely produced ten-inch slab of vinyl!
Posted by Grego Applegate Edwards at 4:29 AM

Labels: los angeles punk, review of "what is it", what records punk