Imogen Heap Improvises in A Special Series of Concert Downloads 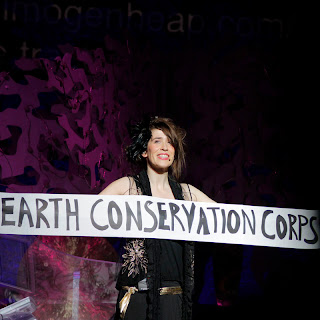 Singer-songwriter-instrumentalist Imogen Heap has real artistry. She has a glorious voice, very rangy, capable of a wide spectrum of expression. She completed a North American tour recently and at each stop she devoted a portion of the concert to an improvised piece of music. She asked the audience to pick and key and tempo and proceeded to put together a piece of music on the spot. Not surprisingly her voice is a large part of the result. With the harmonization devices she can come up with a minichoir of Imogens and she accompanies and contrasts melodically on keys.

Each improvisation is dedicated to a particular local charity. They were recorded and all of them can be downloaded from her site http://charity.imogenheap.com via a contribution ($1 or more) to that charity. (I believe there are 24 (?) separate improvisations available from as many city stops.) It's a great idea and the results that I have heard are fully worthy of her growing reputation. The one I've listened to at length is from her Washington, DC concert. Very beautiful Help a charity and dig Imogen off the cuff by checking some of them out!
Posted by Grego Applegate Edwards at 4:31 AM