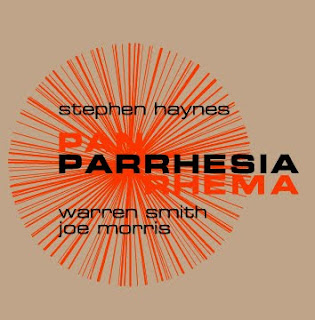 Stephen Haynes plays trumpet and fluegelhorn. He's been appearing in the free improv and jazz limelight (such as that is) increasingly it seems. He is joined by double threat drummer/mallet vet Warren Smith and the distinctive guitarist Joe Morris on Parrhesia (Engine 033).

It's a reflective and occasionally boisterous outing that shows Stephen's attention to sound and line to very good advantage. He was one of the late Bill Dixon's students at Bennington and shows the influence in his use of space to surround and punctuate his improvisational poetics. You can hear a little of the later Miles. And there's a certain puckish Lester Bowie-like jabbing of the sound envelope as well. But these are just prefigurations. Warren Smith shows himself as usual to be a great team member in an outing such as this. The drumming is geared toward the sound events and his marimba work adds color and texture. Joe Morris is about as subtle on this one as you are likely to hear. But what he does creates interest and atmosphere.

It's a recording that you can get inside after a few listens. It has a hauntingly pensive quality. The language of freedom in the musical ensemble is used to create stasis and movement, contrast and color.
Posted by Grego Applegate Edwards at 4:24 AM