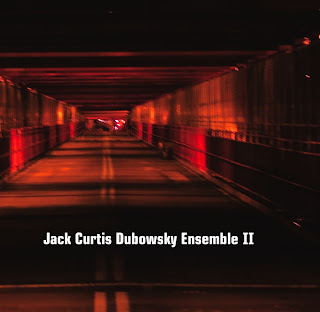 Dubowski is a present-day composer in addition to his performances in the ensemble. The album has composed elements, presumably the product of Jack Dubowski’s musical imagination. Then there are improvised elements, partially resulting from the settings and note values assigned to the synthesizers, partially what Hall Gull is doing on the trombone, partially the overall group situation and those free-er moments that occur throughout the set. No one overplays and there is a kind of appealing spaciousness to what they do. It is not so much music that tries to go to endlessly different places as it is music that sets up shop in a certain place and creates musical meaning within the defined parameters of the pieces themselves.

It is a band that finds a niche and then presents eleven relatively short works to explore the ramifications of the conceptual idea. The sort of four-tiered sound of secular drum rhythms, bass motifs, an independent synthesizer line and Gott’s altered trombone sounds is the cornerstone of the set. After a few listens I felt that this kind of rigorous limitation of roles as assigned and musical universes explored was actually a positive element. The music goes its own way without any frenetic sense of urgency. It unwinds its various laid-back grooves and allows the electronics to generate the unpredictable.

This is not music that is easily classified. I suppose you should think of it as electro-acoustical music that draws on rock and jazz elements and resituates them into a highly singular new music matrix. This is slowly developing music that over time is quietly rewarding and without a doubt worth hearing.

Originally posted on May 24, 2010 at www.gapplegate.com/musicalblog.htm.
Posted by Grego Applegate Edwards at 5:26 AM