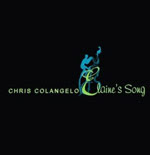 Chris Colangelo plays some ear-gabbling solos on the contrabass. He also writes some very interesting and musically advanced music in the modern jazz bag. He is an ensemble man too and he has an ensemble, man. His second CD is Elaine's Song (C Note 001) and it has everything good happening in it.

Joining Colengelo for this record is a set of musicians that fully attune to Chris' music. There's John Beasley on piano doing beautiful interpretations of Colangelo's music and soloing in the post-Evans mode but with absolute assurance and real artistic flair. Steve Hass does everything a drummer should do--beautiful time that drives and loosens, solo moments that add to the excitement....The three-sax lineup of Bob Sheppard, Benn Clatworthy and Zane Musa gives the ear solid modern soloing and sympathetic readings of Colangelo's music.

The original pieces are very contrasting and strong. It is the sort of music that Hancock and Shorter wrote for Miles and Blue Note in the mid-sixties. And yes, perhaps it approaches those heights now and then. Colangelo also throws in an early Trane classic and a Steve Swallow song that reminds us of the great pieces that grand master of the bass has written.

The music spins you around in your chair. It is excellent in every respect. Colangelos playing, his writing, and his band are shown to great advantage on Elaine's Song. And so it is highly recommended. I only hope he can get this band rolling on a long-term basis and continue to perform and record with it. Because it is a group to watch. Absolutely.
Posted by Grego Applegate Edwards at 4:20 AM