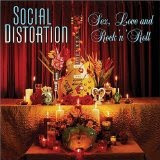 A good friend of mine gave me a copy of Social Distortion's Sex, Love and Rock 'n' Roll (Time Bomb). I'm glad he did. The album came out in 2004 and was their last, though a new one is apparently in the works. This is Southern Californian in the fact that they hail from there. Beyond that I don't really have a clear concept if that region has a special style. I think it's Social Distortion that has that.

The album has some nice melodic material, done with an edgy grunge. Power chord progressions are proffered for your consideration. It's a well-built sound. The lead vocalist has a good inflection to his voice.

More than that it seems to me that this is a good example of how edge can be molded to songwriting. They do that well and so the package has definite appeal. I like this one.
Posted by Grego Applegate Edwards at 4:17 AM