Jeff Beck, in Case You Missed This One 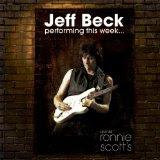 Jeff Beck revolutionized the sound of the electric guitar when he came up with the Yardbirds. Stepping in Clapton’s shoes was not easy, and although the latter built a legend around himself, it was Beck that got his mature sound on the record grooves first and gave guitarists a model that in turn led to Cream, Hendrix and metal.

He has had a long career and I won’t rehearse those facts on this page. A while back a CD-DVD hit the public that showed him still at the very top of his abilities. Performing This Week, Live at Ronnie Scott's (Eagle) has had tons of words spilled on it so I won’t go into long details. It’s a beautiful example of how an artist can keep developing out of his initial style. Jeff combines slide, fingering, amplification and choked notes to evoke a tonal landscape that envelops the listener. He still has that sound; maybe even more so now. With a sympathetic group of sidemen Beck puts in a performance worthy of his reputation. “A Day in the Life” done by anybody else might fall flat. Beck pulls off his version with absolute flair. Is it jazz? Don’t think so, don’t care. Beck is a master of the pulled note, the screaming tone, the variety of percussive attacks. It’s great to hear him at a peak. By all means seek this one out if you have aspirations to electric profundity. . . or if you just want to listen to a really nice set of music by a guy who deserves all the accolades he can get.

Originally posted on March 17, 2009 at www.gapplegate.com/musicalblog.htm.
Posted by Grego Applegate Edwards at 5:33 AM