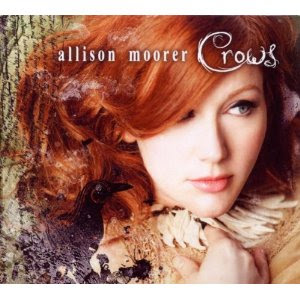 I don't know much about Allison Moorer. She sings, she writes songs. She wrote all the songs on her second album Crows (Ryko 11004). Somebody plays acoustic guitar here and there, but since the album does not list the musicians I don't know who it is.

When I came of age in publishing before the digital era there were graphic design do's and don'ts that we all paid attention to, because breaking them made it impossible to read the type. Those who design CD jackets today break all the rules and the result is that the type functions as a precious aesthetic object that is there for enhancing the design. The words aren't read. They cannot be. Crows isn't as bad as most, but it simply leaves out things like who is playing, so...

Anyway Allison writes alt-pop ditties that are attractive. The lyrics are a more-or-less serious sort of thing. She sings them with a lovely voice that has a certain affinity with Sarah McLaughlin. It's nice.
Posted by Grego Applegate Edwards at 4:07 AM