Justice: Cr*p Has A New Name 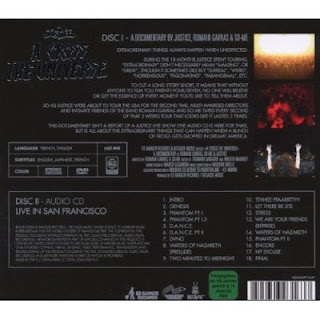 Now I suppose I’m like the next fellow in many ways. Part of my life involves the exposure, in many cases the endurance, of whatever pop culture is putting in my way via the various media involved. It’s important to allow that to happen (to get a finger on the lifepulse of today's ethos), but not always pleasurable. I tune in to the so-called “music” channels of my TV cable service for brief periods to be ensorcelled by the next new craze. I often do it with the sound off, because much of the pop stuff has very little to do with the sounds being made but rather everything to do with the super-slick visual blitz. Bands playing “live” have a certain look now that owes much to how Hitler’s PR guys staged their famous demonstrations. Striking vastness, huge crowds demonstrating their total commitment to whatever the hell, and the focus, the “act,” the “product” given huge monumentality by camera angles and the way the “stage” is constructed. The media people seem to become better and better at this. To me it’s all a little frightening.

So it gets to the point that the creation of superstardom is an autonomous mechanism in which the stars become interchangeable, almost irrelevant to the process of enshrinement. Step in a couple of French dance mixers, known as Justice. I have a copy of what is meant to commemorate their first major US Tour, A Cross the Universe (sic) (Ed Banger Records). OK, so it’s a CD of their San Francisco show, plus a DVD documenting the tour. Now dance music and I are not on the best terms. Most of it I hate. So take what I say as a part of that.

The DVD is the most interesting segment to me. It’s a sort of deadpan documentary. These two guys don’t lip synch, they synch completely. There is no performance beyond its simulation on CDs that are "mixed" and pumped out to the audience. It’s the two of them with CD players (DJ Style) at the center of an amazingly glitzy set up. There’s a white illuminated cross on stage. (This is somehow Christian stuff, in this case one must add “whatever that means.”) The two guys prance around and act like stars. The audience carries them prone through the crowd. The two guys shout and wave their hands over their heads back and forth. The crowd does too. The crowd jumps up and down. Some of the young women in the audience show their breasts. Gee. Parr-taay!!! The problem is, these guys are just a couple of schmoes that mix. What they mix is a bunch of turdy stuff that hits a low point on the scale of 1-10 in musicality. It's button pushing of the worst sort. No matter, the audience is in the presence of STARS and they act accordingly.

OK, and then there are the moments off stage. The mixers grow increasingly more inebriated as the tour progresses. Their manager (?), if that’s what he is, is a gun freak and tries to get them all into toting rods. Ultimately one of the two guys gets into a fight in the parking lot with a very drunk “fan” and bashes him over the head with a beer bottle. Cops come, Justice gets carted off, along with the manager. Symbolic? No, not at all. Meanwhile the bus driver seems like the only together guy in all of this. His skills as a driver are needed intact, so he is the most precient, conscious, rational. Necessarily, if they are not to crash and if they are to make it to the appropriate venue in the next city. This is all a God-awful reminder of how bad the pop world can get. The emperor has no clothes. Music does not really exist anymore in this pocket of life. They may get Grammys, and all kinds of awards. It’s crap though. I’m sorry for those who like it.

Originally posted at www.gapplegate.com/musicalblog.htm.
Posted by Grego Applegate Edwards at 4:36 AM