Dan Hicks and His "Tangled Tales" 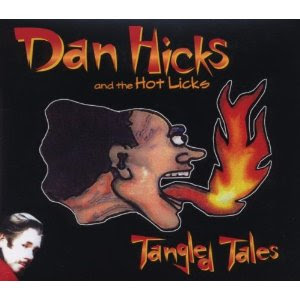 Dan Hicks (and His Hot Licks) did for string band swing in the late '60s - early '70s what Jim Kweskin did for jug bands. He revived his version of it and made it popular, at least for a time.

Mr. Hicks has resurfaced in the last decade and made a number of albums that show him undiminished. There's one from 2008, Tangled Tales (Surfdog), and we take a peek at it today. It's Dan and his laconically droll vocal style along with female backing vocals, the chunk of an archtop rhythm guitar (is that him?), some guitar leads (some really pretty darned good. . . him?), a violinist and rhythm section.

All that goes together to create a kind of modified rock meets Django's backup band meets western swing overtones meets a little blues connotation. As always this is fun music not meant to be purist (whatever that might mean). He does some originals, a vocal version of Horace Silvers' "Song for My Father," "Subterranean Homesick Blues," "Blues My Naughty Baby Gives to Me," and on from there.

This may not be his absolute best record, but it does divert and amuse, which is what it's meant to do.

I found it a nice refreshing change from my usual fare. You might also.
Posted by Grego Applegate Edwards at 3:49 AM