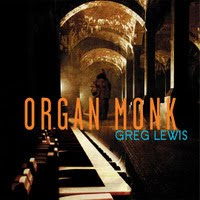 That the organ trio and the music of Thelonious Monk have been of continued importance in the music world as we enter the second decade of the millennium is quite understandable and right, but in 1971 I would have not been quite sure what the future was to hold. Monk was an honored elder statesman of the music back then, but his music wasn't played as much as it should have been; the organ trio seemed like it was on the way out (with of course the incredibly important exception of the original Tony Williams' Lifetime).

Forty years later and Greg Lewis's release Organ Monk seems as opportune as it is welcome. Greg Lewis is joined by guitarist Ron Jackson and drummer Cindy Blackman for this very hip romp through some of Monk's gems.

Anybody who has been out there listening knows that Cindy Blackman wields a monstrous talent on the drums. She has drive, fire and a way around the top (OK and the bottom) of the set that shows her to be a logical successor to Tony Williams, which fits totally with where this music is. No, I don't mean she is a Tony protege, just that she too has artistically advanced the level of drumming to be had these days. She is more in the tradition of Frankie Dunlop's Monk drumming than Ben Riley's. That means she is a melodic force in the treatment of the Monk head-lines. That may have gotten Frankie fired (if you believe the stories), but to me it added so much to the structural recognition of Monk's beautiful rhythmic asymetries. Tony dug it too, by the way. My point here is that Cindy plays beautifully on this album, and especially in how she reinforces the melodic content of the music. She forms a critical part of these proceedings. Not as a Dunlop or Williams imitator, but one who actively contributes (in a great way) to the Monkishness of the music.

Ron Jackson plays a very tasteful guitar on these numbers. His solos maintain interest and are far in advance of the typical organ trio guitar playing, yet his comping shows that he has fully groked what the guitarist's role is in the organ trio tradition. Nice work!

Greg Lewis, who cites Lifetime's indispensable Larry Young as a major influence, clearly has steeped himself in both the iconic organ-izing of Jimmy Smith and the progressive felicities of Mr. Young in his prime. It seems that something like that would be a prerequisite for making a good organ trio go at Monk's music. Or at least it makes the results a hell of a lot more interesting than a more straightly traditional approach.

Greg Lewis sounds totally relaxed and so comfortable with Monk's pieces that he has grown into them as an individual force. He and the band attack each number with love and care and get the maximum torque in play.

In the process this album gives notice that Greg Lewis is one of the important Hammond voices active today. He has linear flourish but taste as well; his is harmonically advanced in what he does with the music; and he swings. The whole band swings. He's encompassed all of the tradition (I even hear a little Milt Buckner there in "Locomotive")--and that means ALL of it--and made it the foundation for the Greg Lewis style.

For lovers of Monk, for lovers of the organ trio, this is one of those joyous releases. Joyously made, joyously heard. I will be happy and proud to file this in my collection not as "something I reviewed," but rather something I would have been happy to get under any circumstances. You may very well feel the same way. I would not be surprised and I would be pleased if it were to be well-received. It should be.
Posted by Grego Applegate Edwards at 4:24 AM