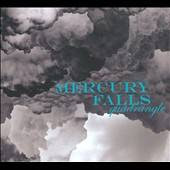 There was a time in the '80s where ECM had a long string of recordings that had a certain sensibility--it was "jazz" with an ambiance. . . soundscape jazz, ECM jazz. New age music was generally a watered-down, all rough edges smoothed kind of simulation of this music and like disco was to funk, in some ways it made that parental form as passe as its illegitimate offspring, at least for a time. That's a long story with various personalities at the forefront of taste dictatorship, and we don't need to go into it.

Here from the perspective of 2010 the "holier than thou" assertion of what forms of music are allowed has been discredited and presumably all the various substyles that were subject to ideological repression are now free-er to flourish and continue developing.

Mercury Falls, a quartet that builds on the soundscape jazz genre, weights in with a debut album, Quadrangle (Porto Franco), and shows that there's still good music to be made. Led by guitarist Ryan Francesconi (who did some fine arrangements on Joanna Newsome's last album--reviewed in this blog; see below) and ably assisted on the baritone by Patrick Cress (plus acoustic bass and drums), Mercury Falls turns in a very appealing, atmospherically evocative series of tone poems.

Think of middle-to-later period Jan Garbarek or perhaps early David Torn and you'll get some idea where this music delineates, though this is no copycat project. This is not a set that features in-your-face, chops-out-front solos by the principals. It is a group effort, a blanket sound. It is well done and worth the effort of grabbing if you like mysteriously unfolding soundscapes that have various structurally distinctive forms. It's another, well-conceived wrinkle on that sort of thing and it's quite easy on the ears.
Posted by Grego Applegate Edwards at 4:17 AM