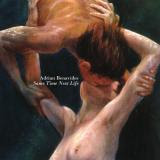 It's heavy music, music with an edge, post-prog with an attitude, metal with a brain. The music comes at you hard and full, much of the time, with a few lyric interludes for contrast. There is a bit of industrial in the mix but never in a formulaic way.

It's in expanded song form with vocals by Adrian, weaving around the theme of shock and bereavement of a father on the death of his daughter. In fact it is a personal response by Benavides to the stillborn birth of his daughter Valentina.

This is avant rock of a high order. It's a great example of places art rock is going today.