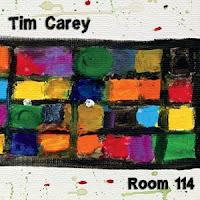 Electric bassist-composer Tim Carey comes to the fore with his debut effort after a significant apprenticeship playing around Seattle and around the world with a varied cast of worthies that includes Julian Priester, George Cables, and others.

Room 114 (self-released TCM-001) is the disk. It puts together a mellow yet lively sort of fusion that branches out of Pat Metheny's later work but then goes its own way. Tim is joined by the lucid guitar of Brendan Odonnell, piano and keys by Eric Verlinde, drums and percussion by Jeff "Bongo" Bush and more drums on selected tracks by Tarik Abouzied. The band is on the mark and Tim contributes some very nice post-Jaco soloing.

The songs and ensemble riffing got my attention on first listen and they continue to do so. It's a tasteful blend that has a kick to it now and again and manages to stand out from the pack. Give it a listen!