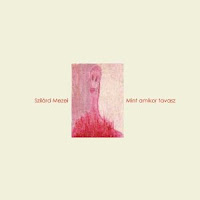 Today we have a most unusual original solo disk. It's Szilard Mezei playing unaccompanied viola and contrabass in a series of improvisation/compositions. Mint amikor tavasz/When Spring (Not Two 819-2) gives us a kind of intimate glimpse into Szilard's musical thinking.

It follows the avant improvisational muse in a variety of modes and moods. There are tumbling abstract cascades, melodically strong avant line weaves, and things somewhere in between. Throughout a vivid sense of both freedom and original structure prevails.

On viola Mezei is an original voice with a fully deliberate intonation that veers sometimes a bit from the tempered scale, but in consistent and fascinating ways. On viola and on bass he plays music that virtually defines his vision of modernity. His bass playing is of a piece with his conception of the music, and turns out to be technically proficient as well, a nice surprise given its status as a second instrument for him.

This disk, allowing for a concentrated series of listens, will give you cogently Mezei's original brilliance in a bare-bones context. Fascinating! Recommended.