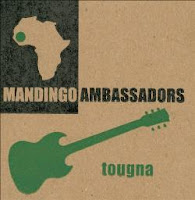 There's a rockingly hip foundation of electric bass, drums and conga-percussion, on top of which are some very hip guitarists, one who solos with style and facility. There are two wind players who can solo with plenty of credibility as well. Then there's the lead singer, Bebe Camara, who has the highlife-and-beyond style covered with soul. Mamady Kouyate is leader and one of the guitarists.

It's a West African sound, tempered by some of the classic Mid-African highlife classics. This is music that moves! A great record to get the party going, even if it's a party in your head.