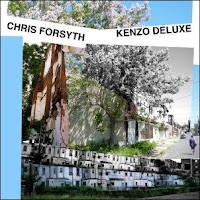 Kenzo Deluxe (Northern Spy 025) is all about one thing: making solo electric guitar music in a room, live (with digital delay to help things along). Chris Forsyth is the guitarist. If he is a technical wizard, he does not show it on this disk. This is more about weaving attractive rock progressions, riffs, and mesmerizing repetitions than it is about wowing you with prowess.

There is a psychedelic quasi-Indian raga rock aspect to it and there is a kind of super paired-down pulsating soundscape aspect too. Fripp and Eno minus Fripp...and Eno. Instead something else. Forsyth, musically naked. Making music that has a memorable quality. But very elemental, basically.

I am not going to tell you that Chris Forsyth is the next big thing. He no doubt isn't. Not at this point. What he is involves creativity and imagination. Oh and a sort of nervy rock starkness that is refreshing. He's not going to be one to trade fours with Pat Martino but he in some ways creates the art of rock for himself, anew, by sustaining an entire CD with just his guitar and his imagination. That's something.