John Abercrombie Quartet, Within A Song 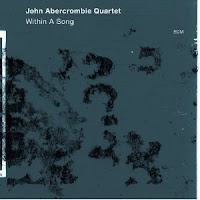 I don't suspect I need to tell readers of this blog that John Abercrombie has been a major force, a major influence on jazz guitarists since sometime in the '70s. I listen to many new guitarists in the round of reviews I do, and I have become more impressed in recent years with just how influential he has become.

But as with many great artists there is no ONE John Abercrombie. He changes as he sees fit, both over time and from project to project. So his latest, Within A Song (ECM 2254) has a way about it quite different than, say, the first Gateway album he did with Dave Holland and Jack DeJohnette way back when. Yet it is still Mr. Abercrombie that comes through, all that he is as a musical artist, and what he plays here has some relation of course to his earlier output. Perhaps that is pretty obvious.

The new album puts John with tenor original Joe Lovano, bass master Drew Gress and Joey Baron, a drummer of great depth, fire and subtlety, depending on the project.

This is an album of standards and a few Abercrombie originals. It is music in an ultra-laid-back mode, a cool sort of approach. That doesn't mean that the players aren't reaching back for inspiration and well-conceived improvisations. They are.

Abercrombie has evolved his tone so that at the moment it is unmistakably him, as always, but so mellow as to seem to be closer on first listen to a Jim Hall than ever. Yet what he plays is all Abercrombie, all the time. And even his tone has a telling Ambercrombian fullness and twist. At any rate he is in top form and must be heard with some concentration to be appreciated. Lovano sounds great too as you might expect. Gress and Baron hit more lightly but no less profoundly than usual. And the whole thing swings big!

It's an album that reminds us why John Abercrombie is such a force today. And it's a great listen too!