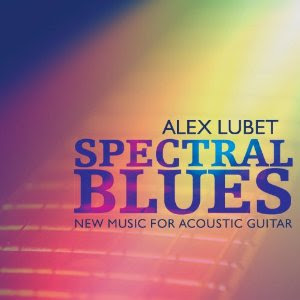 Alex Lubet on acoustic guitar is the focus of Spectral Blues (Ravello 7865). He gives us two major suites in multi-parts, "Reliquary Dances" and "Eight Ouds." These are "classical" compositions for steel-string acoustic.

Lubet combines a fine presentational technique with extended guitar sounds that include jazz-like voicings, and Eastern and Mid-Eastern string playing methods that come out of traditions of practice on the oud, koto, pipa and other non-Western, non-guitar stringed instruments. Assumed also in his music is the classical guitar tradition and modern classical sensibilities.

Put all that together and you have highly interesting work that induces contemplation and a heightened sound awareness. It is a very subtle tour de force that will appeal to all who love the pure sound of an acoustic played well, with the emphasis on music rather than spectacle.