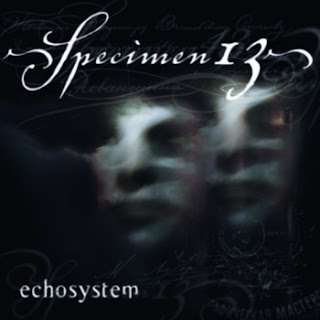 Oh, yes, when something is good, you can know it the moment you hear it, sometimes.

Then the affirmation deepens the more you listen.

The prog-outness of project-band Specimen 13 and their album Echosystem (Unsung Productions) is that. Denis Rodier is drumming, giving us some vocalizing and Martin Vaniar is on guitars (and some bass and soundscaping). That's the core. Then Adrian Benavides and Markus Reuter had a hand in arranging, mixing it down. And Markus produced the recording. He plays some of his patented touch guitar too and had a hand in the sound design, which is perhaps a fancy way of saying he helped shaped the final ambiance you hear, which is rather wonderful. Adrian plays some guitar and etc., too. Then there is a cast of other musical helpmates including Trey Gunn, Tony Levin, Pat Mastelotto, and some vocalists, and some other-others, other folks. All-in-all a hot combination!

Well now if that sounds promising, believe me it is as good as you can imagine it. It's 30-something minutes of highly evolved out prog-rock, post-Crimsonian heaviness atmos-edge. It's dem fine. You can shell down a few peanuts and get it at http://specimen13.bandcamp.com/ You should.