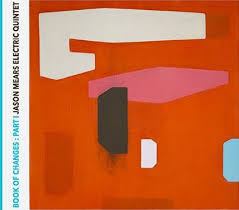 Readers of this blog know that often this is where "electric music" can be found, whether the album is led by a guitarist or not. Today's disk is a great example. It is the Jason Mears Electric Quintet, a population of heavies, a loosely potent totality. The album is Book of Changes, Part 1 (Prefecture 008).

This is electric avant jazz-rock following in the footsteps of Miles Davis in his psyche-electric stage and then what Wadada Leo Smith did with that. It does not mimic. It does not imitate. It is a step all its own. Jason Mears has worked out a system of notation, without bar lines, charting out long and short notes in a specific sequence, which the players then both play and improvise with at the same time. It's a technique he's worked out with the Empty Cage Quartet (I cover some of the disks on the Gapplegate Music Review blog, see link to site on left). The album at hand goes more into the electric zone.

The group is one of an all-star sort, in terms of ability, anyway. Jason plays alto sax and clarinet, Jonathan Goldsberger is on electric guitar, Angelica Sanchez plays electric piano, Kevin Farrell is on electric bass, and Harris Eisenstadt plays drums.

In order for such notation to work, or course, the players must be highly creative, highly skilled in the improvisatory arts. These folks very much are. Mears is a mother, Goldberger can let loose and does, Angelica Sanchez is a new star on keys, as shown in her work with Wadada as well as her own groups, Farrell hits it just right and Eisenstadt is the embodiment of free-rock invention.

There is never a lag point. It just keeps going strong. The realization of the notation is at the highest level of invention. The result is a seamlessness between composition and improvisation.

If you want to know where free rock improv is going, it's here on this disk! Essential.