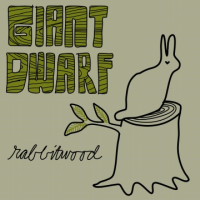 You listen to enough music, day-after-day, sooner or later a number of CDs kick themselves out from the bottom of the pile and say to you, "this is different. I have some music for you that goes a ways away from everything else you've been hearing." And if you cast with a wide net and not limit too much what you'll consider, just goodness as a rule of thumb, it happens more often than perhaps you'd expect.

It happened to me with the group Giant Dwarf and their CD Rabbitwood (Engine 2013). It's 16 pretty short numbers by the duo of Martin Philadelphy on electric guitar and Jeremy Carlstadt on drums. This is avant psychedelic-skronk-shred-surf-jeazzzzz of a pretty special sort. Mr. Philadelphy has a nice post-Rypdalian tork to his metallic soaring and he goes both in and out with a musicality not geared for adenoidal sludgeheads, whoever they might be. Jeremy Carlstedt plays some busy and hot drums, free and open and driving and responsive.

So leave it to Engine Records to come up with stuff like this. They often slip out this sort of release in their unassuming fashion, and you put it on--BANG! Nothing knee-jerk about this music.

You like weirdsville avant metal?? Man, you will love these guys. I think.

Posted by Grego Applegate Edwards at 7:24 AM