Colla Parte, A Cast of Shadows 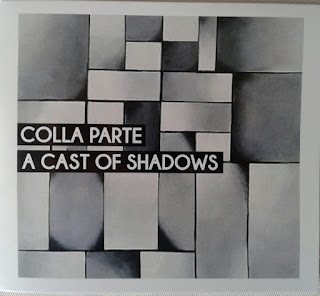 If you never experienced the spectrum of "serious" music out there today, you've missed quite a bit, I should think. I started like everyone else as a kid. I didn't know much of anything except what was on the radio and what my father played, his records. I followed my nose most of my life, one thing suggesting another, until I am ear-wise where I am.

I suggest this because today's CD is miles away from some of the indie rock I cover here, and yet it's something you should hear if you want to give yourself a stretch and grow.

I speak of the avant improv trio Colla Parte and their new CD A Cast of Shadows (self-released). The group consists of Daniel Barbiero on double bass, Perry Conticchio on reeds and flutes, and Rich O'Meara on vibes and percussion.

The album and its avant improvised music has as thematic the contrasts between shadow and light, as expressed musically. Of course music cannot directly express light--but the poetic thought is what motivates these three adventuresome artists. An interesting aspect of the instrumentation is Rich O'Meara's ability to get into the vibes and percussion or act as the drummer. With that option the group can grab into a chamber new music sound or a free music jazz feel or anything in between. And they do that.

Daniel puts much into play either arco or pizzicato, Perry has melodic improv ideas to spare and Rich engages in dialog and commentary in ways that extend his role and function.

If you are a young reader of this blog, you might find it consoling to know that most of the guys in this trio still have their hair, or maybe all do and one shaves his head. I don't know. But the point is that there are younger people coming up into avant music. It isn't something just for the cane and sweater set!

Colla Parte is a quite interesting example of music you can make because you have learned to hear something else than the ramrod military-march-equivalents-avec-boobs like you see and hear on the videos today! There IS much alternative music of all kinds and this is part of that. A good part.