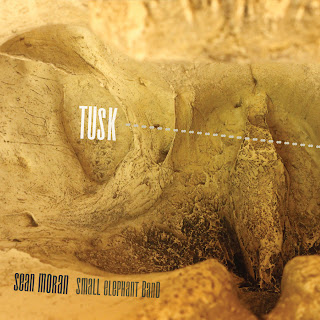 The Sean Moran Small Elephant Band is probably not something you would be likely to read much about in the magazine Guitar Player. I could be wrong. Why that may be is that this is a band that puts music ahead of individual virtuosity per se. Their album Tusk (NCM East 40136) tells the tale. This is chamber jazz but not in some rote way. The music has composed elements that work to frame the improvisations in the best sense--in that everything melds together in a modern art kind of way so that each number has intricately planned elements and spontaneous extrusions that work together beautifully like a single abstract expressionist canvas by one of the greats of the visual art world of mid-last century. Who is it that composed these numbers? I cannot say because the CD does not. I will assume that Sean Moran is the composer? What matters for now is that these composition-arrangements are exceptional.

And the band? A judicious choice of sensitive improvisers that work hard to get a group sound, an ensemble vividness. There's Sean Moran, of course, on nylon stringed guitar. He's studied flamenco I read, but quite clearly classical and jazz guitar as well. He has a subtle way and if you listen closely to him throughout you get much to appreciate. Michael McGinnis adds a great deal on clarinet and bass clarinet. He has great sound, plays his part in the ensemble with flair, and can give you some very modern soloing. Chris Dingman on vibes is central to the sound. He does his ensemble thing with care and artistry and when called upon plays himself to perfection. Reuben Radding on contrabass sounds great and of course we've been covering his playing for some time here if you look back. He excels in the structured composed world of this music and takes fine advantage of the open spaces he gets to do things with. Harris Eisenstadt is a brainy sort of drummer with beautiful feel (and a composer of great worth too). What he does here is an object lesson on how you can swing and rock with full feeling and force yet get a chamber feel that balances everything well.

So this is an album of wholes--a very whole sound, players that contribute each to the whole in wondrously special ways--and that isn't something I would say about many similarly constructed groups. The compositions draw upon new music, modernity, freedom, avant music without going in predictable directions.

It's a guitar player's album, yes. But there is a selflessness in everybody's playing here, an attention to the total outcome that leads to exceptional music. Stunning!