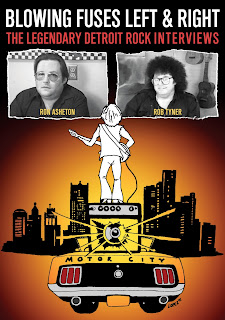 Lest we forget (and there have been those who would rather we did) the '60s in America were times of great upheaval on both social and cultural levels. The struggle for Civil Rights, the attempt (in part successful) to redefine and/or rediscover an ethics and cultural outlook beyond what had become well-entrenched by the comparatively stolid '50s, the idea that all have an actively articulated role to play in a national debate of who we are and what we want to be, all became particularly pronounced by the late '60s.

With that came a flowering of rock (and soul) as art form. Two Detroit bands of the era, the Stooges and the MC5, made an impact on the music scene that was not initially huge but over time came to be seen as increasingly important for the music that came after, no matter how stutteringly sporadic that "after" became.

It was with this in mind, during the height of the Reagan years, that Gil Margulis, young student and enthusiast, set out with a video camera to interview some key members of both groups. Blowing Fuses Left and Right (O-Rama MVD DVD 5119D) captures three lengthy interviews made during that time.

So we have interviews of the late Ron Asheton, guitarist and co-founder of the Stooges, late MC5 singer Rob Tyner, and MC5 drummer Dennis Thompson.

These are rough-and-ready segments that gain by the informal, enthusiastically non-professional nature of the interactions to give you first-person insights into the politics and realities of Detroit and the country at large during the time, the playing situation of the famed Grande Ballroom, the struggle to establish a musical identity and the rather horrific results of national recognition and/or the lack of it.

Of course the Stooges and the MC5 were groups with a striking energy level, an in-your-face punkyness that was as innovative as it was considered then brazen. The interviews give you concrete insights into the different outlooks the two bands had, pronounced perhaps especially in the political realm, and the difficulties, traumas and relative triumphs each faced when national attention, enthusiasm and/or hostility was meted out to them during their period as recording artists and touring performers.

Anyone with an interest in these bands, the general rock scene and the cultural history of the '60s will find articulate spokesman and invaluable first-hand testimony as to what it was like! Whether you know the general story or you do not, these interviews are pretty near mind-blowing! Very much recommended.