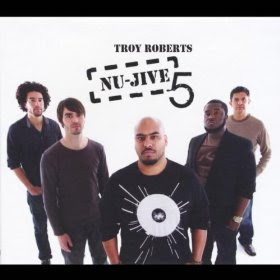 Saxophonist-compositional creator Troy Roberts hails from Perth, Australia and has been making his home in the USA for some time now. He's gotten attention out there as a real artist. I've heard a little of his music but the new fifth album has especially gotten my continued attention lately. Nu-Jive 5 (XenDen) features his fivesome, comprising Roberts on saxes and compositions, Tim Jago on electric guitar, Eric England on electric bass, David Oliverton on the drums and Silvano Monasterios on the keys. It's a tight outfit dwelling in a sort of progressive jazz-rock-fuzefunk realm.

The pieces hang together nicely and there are some very fresh things to be heard here along with some of the more expected groovers. I like how he creates structures of solidity that springboard the music and how all the front line, Roberts and Jago especially, get some time to say some nice solo things.

It may not set the world on fire but it's musically very solid, and sometimes very inspired too. Give it a listen!