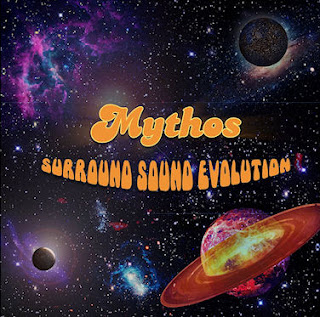 Ever since the late '60s when the various avant gardes and the psychedelic realms of rock converged for a little while there has been music with a consciousness-expanding focus. In rock, the stylistic drift went from psychedelic to prog and jamband space to psychedelic revival with plenty falling between categories. And today anything can happen!

Today we have something that nestles into a prog-synth-space rock place rather comfortably. This is electronic music, I suppose you could say, because it's all synthesized from what I can hear. But it's a matter of what does or does not work, in the end. The outfit Mythos gives you a full-length sonic-psychic workout that pretty much works--on the Surround Sound Evolution (Sireena 2109) CD.

Now one (in my position) should avoid judging anything on the idea of "if I did this music, would I do it this way?" because whatever "I" would do has nothing to do with the music in terms of validity. There are things I might not do myself, and of course things I perhaps couldn't do. So forget that.

You might think of someone like Kraftwerk as far as precedents go. It's electronically spacey in that sort of European melodic way, only updated a bit. This is apparently the second album, a follow-up from their first in 2008.

What matters is that the music is highly structured, cosmically electronic but everyday accessible in its prog melodic fashion. I found it kept me continuously enveloped in ways that were pleasing. Would I have added a guitar? Some drums? Well as I say, this is not my record so never mind that. It's nice.