Permanent Clear Light, Beyond These Things 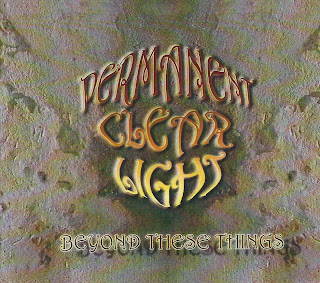 Psychedelic music still has a place today. In much of the psychedelic revival happening from the '80s onward, there has been a good bit of the jam proto-metal or avant realm in play. But we should not forget that the music had its beginnings in the consciousness of listeners as an extension of song form as much as a sound that gradually developed alongside it. So the Beatles' "Strawberry Fields" was first and foremost a song, though "Tomorrow Never Knows" almost wasn't. "Who Are the Brain Police" by the Mothers was a song as much as it was a sound. "Arnold Layne" by Pink Floyd the same. XTC's psychedelic takeoffs of the '80s were centered around song.

All this a prelude to an excellent contribution to psychedelia in the Finnish group Permanent Clear Light's first full album, Beyond These Things (Havasupai Records 001). I've covered an EP and single or two of there's here, but at last an album. And it's good. Very very good.

Keep in mind the intro paragraph has a point: Permanent Clear Light take as their starting point the song form. This is a collection of excellent songs with that distinct wall of psychedelic sound going, some great jam moments, great vocals, guitar and spooky keys, but first and foremost songs as the launch mechanism for orbiting.

They have the knack of coming up with something new using the neo-psychedelic sound, so expect those quasi-Beatlian early BeeGee-ian Indo-cello strings, mellotronian nirvana, phase-shifted everything on occasion, the Floydian floating islands, the fairly compact timeframe (mostly), a little Brain-Brian Wilsonian eccentricity of musical means...just enough of everything but in new combinations and with a freshness that drives it all forward to make it of today.

Arto Kakko, Matti Laitinen and Markku Helin have it together. The album paces very well, the songs are great and there is much excellence to be had here. Beautiful! If you dig the psychedelic thing, there should be no hesitation. Grab this!

Posted by Grego Applegate Edwards at 7:20 AM