Darts & Arrows, Eyes of the Carnival 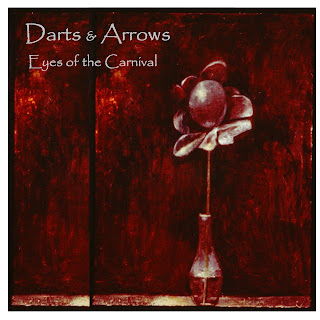 It is by no means an easy thing for the music variously dubbed jazz-rock/fusion/prog/jamband to lay right, to sound naturally grooving, to be able to pair down and get leverage before it launches out. There are outfits that can play incredibly difficult technical things yet never really get rocking. This I most definitely would not say about the combo Darts & Arrows on their album Eyes of the Carnival (self released).

Here we have 30-plus minutes of an EP that gets that leverage. Like early Soft Machine and at the same time middle-period Gary Burton, they establish grooves and stay there as a foundational premise. The compositional matrix laid down, mostly penned by guitarist Bill MacKay with one by keyman Ben Boye (that one balladic), sets the possibilities and then the players open up to them.

Bill MacKay's guitar and Ben Boye's keys have leverage and sound as soloists too. They aren't trying to wow you with chops and more chops, but rather say something musical and at the same time express a sound. They do it well. They don't take long solos either. In fact sometimes it's more about the tune and playing it with feeling, opening up to it. But that is fine if they do it right. They do.

Kyle Hernandez on bass and Quin Kirchner on drums are in that same way concerned with feel and less with "wow" technique.

And so in the end you react like you have been hearing real music in a zone that in other hands sometimes loses the music-first thread. Nobody here is going to cut the greatest technical players. But what they do sounds very right. In the end the music satisfies. Good tunes played with conviction. That's very cool with me.