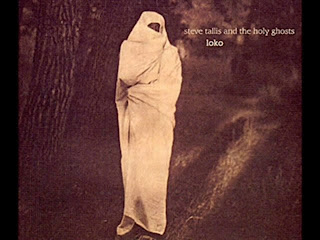 Seasoned Australian vet rock blues guitarist-vocalist-singer-songwriter-bandleader comes at us in a 2003 CD of original songs with his acoustic band The Holy Ghosts. Loko (Zombi cd5) is the disk I am writing about today. It's Steve on acoustic guitar and vocals with some nice violin from Dave Clarke and solid percussion-drum accompaniment by Gary Ridge.

The 2003 incarnation of Maestro Tallis is a folk-blues drenched kind of rock-folk. There are primal progressions that take the place of the standard blues variety and Steve gives us strong, emphatic vocals with a definite blues tinge--a touch of Beefheart and Howling Wolf behind his own brand of deep projective declamation that sounds very right.

The songs are personal expressions of outrage, frustration, affirmation, disapprobation about the world he sees around him. The foment of religious upheaval, social bigotry, hypocrisy, chaos, and personal angst. In other words, this is a blues reaction to the modern, post-modern world.

There is much in the way of originality. He is a kind of new Richie Havens coming from another planet. We get 15 powerful songs in a ritual exorcism of the world's inequalities, a swamp-rock incantation to renew us all.

It's hard-edged music that you must hear more than once to dig into what's going on. Once you do, you get a "new" voice on the scene--though he has worked to get to this point hard and well over the years.

It's very real, strong and in-your-face. It's Steve Tallis into a definite original zone. You should get it.