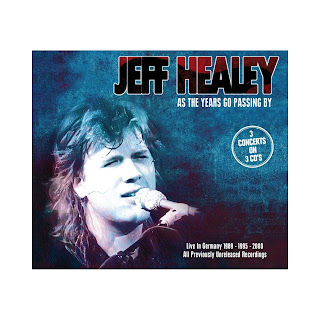 Jeff Healey, Canadian blues-rock guitar-vocal phenomenon, left this world in 2008, sadly. Cancer. But he lives yet. Especially with the welcome release of a three-CD set of him and his band live in Germany between 1989-2000. As the Years Go Passing By (Inakustik 9119 3-CD) captures Healey in excellent form, playing real-deal bluesy rock guitar, singing strongly, playing the mix of covers and originals he was known for, doing it well and doing it in full fidelity sound.

One CD of the original trio follows with a CD each of two versions of the trio with the addition of a second guitarist. So one disk is the 1989 incarnation, the second from 1999, the last from 2000.