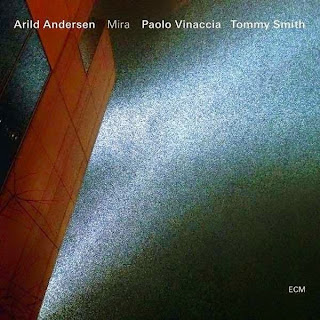 I can think back these many years and remember my life circumstances and how I looked at it all when I bought the first Arild Andersen on ECM. My world, how wrong I was about many things and what the future held! And now as I listen to the new Arild Andersen album Mira (ECM B0019861-02), a life so different, and yet Arild is a constant.

Arild is on bass and electronics, Tommy Smith is on tenor and shakuhachi, and Paolo Vinaccia is on drums. They do a standard or two plus originals. It's a date in the ECM zone--a well-situated blowing date that has a bit of ambiance but concentrates on more-or-less changes and modal based improvising for much of the album. But then there are sheer ambient numbers too, one especially attractive one that begins with an electronic sustain backdrop and some wonderful Andersen bass before going into a folkish ballad.

Tommy sounds a bit like Garbarek without the mannerisms that sheer imitation would entail. He has the righteous tone, the declamatory lyricism and then goes with it for the notes he wants to express. Vinaccia plays the role of loose percussive colorist that one might expect on an Andersen date.

It is quite pleasant going. The strength is in the sheer sensuous and intelligently lyrical bass of Andersen. So really it's a bass-player's statement, his artistic testament, and stands strongly on that fulcrum point. Almost 40 years later, Arild Andersen continues to make himself heard with consummate artistry. And I am glad my ears are still able to hear it all.