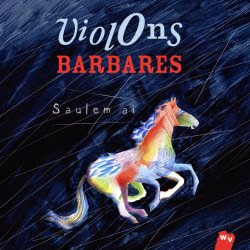 If you want to hear something in the world-traditional zone that makes a uniquely eclectic musical blend, a modern yet primal mix of instrumental-vocal styles, you would do well to hear the second album by Violones Barbares, Saulem ai (World Village 479090).

They are a trio composed of musicians of Mongolian, Bulgarian and French extraction, respectively. Two play violins of a special sort, each with five principal strings and 11 sympathetic resonating strings. The third member plays a special percussion set up that gives him a mix of "ethnic" percussion and the bass drum-hihat of a typical drum set. The vocals make use of Mongolian throat singing, Bulgarian folk singing and much else.

The repertoire has both original and traditional elements from a world mix as diverse as the areas the Mongolians influenced historically and beyond. So we get Gypsy sounds, Afghan, Kazhakistanian and much other regional traditional elements, transposed to make for a driving contemporary mix that emphasizes the virtuoso fiddle styles of the "front line".

It's rather incredible music. It sounds authentically "world" in every way and it rocks! Listen to this one and enter a special place!