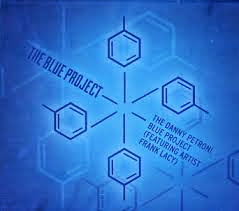 Guitarist Danny Petroni has gone back in a way to some of the jump-blues and humor of Louis Jordan of the late swing era and created his own version of it--not an imitation, not a tribute, but an analog creation of his own. This on The Blue Project (self-released).

It's a big band doing goofy-serious lyrics blues that feature some nice guitar wielding from Danny and Frank Ku-umba Lacy on vocals, trombone and something called the "flumpet"! There is some metal heat from Danny and a general high-spirits over-the-topness going on.

It may not change the world but it gives you a rooted ultra-today jazz-rock take on it all.

No, nothing bad to say to that. And Danny dedicates the album to all who struggle to get it back together in the NY-Metro-Jersey-Long-Island Hurricane Sandy debacle. That story still isn't over. The struggle keeps on going on. So thanks to Danny!