A Psych Tribute to the Doors 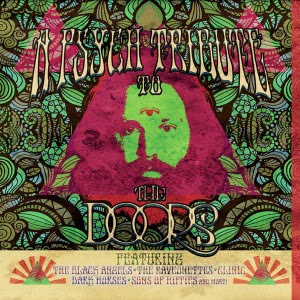 When I was growing up if you didn't like the Doors you were stuck. Their music played everywhere, on AM and FM radio, at your friend's house, at parties, coming out of storefronts, at high-school dances, just everywhere. I bought their first album when it first came out, long before it was immanent, present in all places at most times. I took to the music right away. Morrison was the real thing, the words had clout, the band was excellent, and the songs stuck with you. It was poetic and driving, mysterious-avant and rootsy, life-affirming but on a death trip, rebellious yet a repository of tradition, a bundle of contradictions that the age responded to as to a lost relative.

Well and of course there is a point of saturation, when you are not sure that more is better. But then Jim died. And that ended it.

So we exist still. Humanity, I mean. And the music still sounds fresh. A compilation that's been out for a little bit confirms that, with 13 bands doing 13 of the Doors' gems with full psychedelic flourish, A Psych Tribute to the Doors (Cleopatra Records CLP 1556).

It's the Black Angels and 12 other bands, each getting a certain leverage on a song icon and travelling with it into space. At the end of the space is a garage, for this is garage psych in its own way, mostly all of it.

In the halcyon days of youth all the bands locally played a Door tune or more than one for a while. And much of it sounded something like this in the high school gym, sort of. We lived in a world pretty far removed from Ozzie Nelson and his pancakes then. Our parents, most of them, didn't get it. I feel sorry now about that. Turns out Ozzie-ism came back with a vengeance later, and we did not collectively levitate. But then the Doors and their sound have returned too. Post-surf guitars, Farfisa organs, deep echo, it's stayed around underground and surfaced in various places to good effect. This anthology forms a good part of all that.

No better evidence than on these tracks. They sound in no way dated. New life is breathed into them by pushing them a little further into the psych zone than they were originally, for the most part. But then the Raveonettes take "The End" and give it less push and more lyricism, so go figure.

That is of no importance in the wider scheme. This is music that breathes fire again. It reminds you why the Doors were so strong. Songs!! The songs were the thing...though Jim made us believers by his sheer charisma.

So get all the Doors albums too, but check this one out. It's worth it. Very cool.