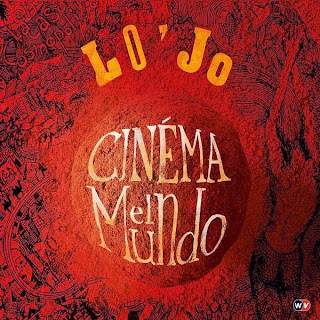 Some music is so different that I initially have no idea what to think, or I even prematurely dismiss it. Then sometimes I think about it and come back to hear it again. That happened to me with Lo'Jo and the album Cinema el Mundo (World Village).

I'll admit the first hearing mystified me. OK they sing in French and what they were singing I didn't quite catch. It's a kind of progressive cabaret pop. And I'll be darned if Robert Wyatt doesn't make a guest appearance. It's a sort of very interestingly arranged art song collection.

I looked on the internet to find that Lo'Jo have been around for well more than the Millennial Generation and this is their tenth album. There is a North-Africa-and-beyond influence, but all reworked to a kind of really oddball music. It partakes heartily in world folk musics and has an almost neo-classical sense in the arrangements.

After hearing enough times, I am a convert. I still don't know what this is, but in the end that is meaningless. It's music that sounds well, very well. It's innovative. It cannot be pigeonholed. At times it has an almost psychedelic ambiance, but no, not precisely. I give up.

Listen a bunch of times. You will no doubt be fascinated as I am with this music.