The Young Mothers, A Mothers Work is Never Done 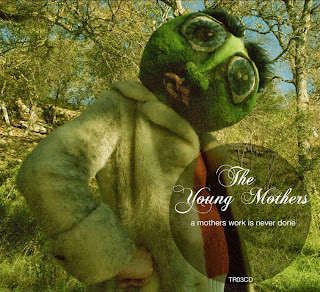 Unless you already know, you never know. And none of us know it all. So it feels like that with acoustic and electric bassist Ingebrigt Håker Flaten and his band, the Young Mothers. It's not exactly what you'd expect. I've been listening to the latest, A Mothers Work is Never Done (Tektite), and it frankly surprised me. It starts off in a hip-hop bag and then gets plenty outside.

The band is interesting. Of course Flaten is on the bass. Chicago's Frank Rosaly is in the drum chair and rises to the occasion with grooves and freedom as called for. Then Jason Jackson plays a key role on reeds, as does Jawaad Taylor on trumpet, electronics and vocals. Jonathan F. Home plays electric guitar. Stefan Gonzalez takes up the vibes and appears on drums, too, in his special way. He's Dennis Gonzalez's son and a member of Yells at Eels as well as appearing in his role here.

It's a group effort all the way. There are nice arrangements, hip compositions, good soloing and a mix between out jazz, electric jazz and hip-hop that is unusual but also works well because of Flaten's leadership and the entire band's commitment.

Once you get past what you do or don't expect from this band, you can relax and appreciate. It goes at it and succeeds by taking the music to places that feel right, with conviction and fire. It is cutting-edge yet it incorporates something of what is happening outside the realms of free music in the insular sense. That's healthy when it works. It works.