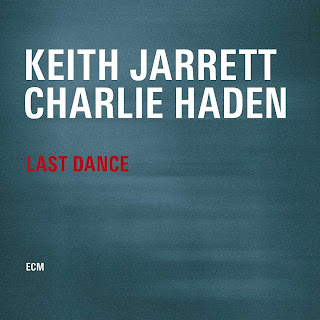 The death of bass-master, leader, seminal new jazzman Charlie Haden has been having something of a delayed effect on me. As the days go by I think more and more of the wealth of gifts he has given us, as Ornette Coleman's original and most original bassist, as a leader of the wonderful Liberation Music Orchestra, as the bassist in Keith Jarrett's bands through the early seventies, and in myriad other contexts this was an artist whose impact was perhaps subtle but thoroughly penetrating.

He was a bassist with a one-of-a-kind sound born of an enormous tensile grip, with the biggest, woodiest tone of anyone after 1960, nevertheless wholly HIS sound, with a deliberate, perfect intuitive sense of what to play whether it was harmolodic Ornette and the kaleidoscope of multiple key centers, the adventuresome post-Ornette of Keith's first bands, the diversity of his own music or just plain old bop and changes. He excelled and was himself at all times. He showed us that strength can top speed when it's inspired.

And now he is gone. That's hard to bear. But we have his recordings.

As a kind of final gesture of musical impact, we have a somewhat surprising release, a reunion with his old leader, Keith Jarrett, doing a series of deeply felt standards in duet, Last Dance (ECM 2399 B0020803). It's just Charlie and Keith in the latter's Cavelight Studios, getting together one more time.

This album is not about flash, about velocity, though there is a bit of it here and there. Charlie's playing was never that anyway. But Keith too is in a subdued mood. Each carefully pick their notes, try and make the most out of the old chestnut tunes, and they surely succeed.

"Goodbye", the final cut, moves with the hindsight that this WAS goodbye for Charlie, one of them anyway. But in any event the entire album has that perfect concentration on essentials. No, this isn't Keith the technical wizard at work, not primarily. He and Charlie are playing for themselves, getting inside the songs, not playing for the big auditorium or the cutting contest.

After you listen a few times it hits you. This is not about anything but what notes they lay down on top of the classic standard song structures. And they try and make it count.

It's a moving testament to an old musical relationship that created magic most every time out, to the fundamentals of jazz expression.

So long and thanks so much, Charlie. You gave us so much and we are grateful.