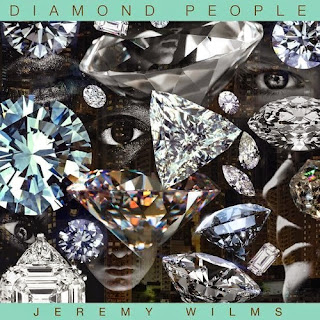 After various stints with Butch Morris, Chico Hamilton and as the guitarist for the Broadway musical Fela!, Jeremy Wilms comes front and center with his first album, Diamond People (self-released). It's a wide-ranging jazz offering with Wilms the composer and the guitarist getting equal attention.

A largish band carries the music, including Tomas Fujiwara and Greg Gonzalez. There are good players here and they get a hearing. The main emphasis is on Jeremy's pieces, which range from straightforward swinging items with the spice of the modern, some outside electric rockers, some Afro-centric folkish numbers, and everything more-or-less in between.

In fact there is so much diversity in this music that one doesn't know what's next. That is not a bad thing, surely. In the end though one can start feeling overwhelmed with a kind of stylistic overload. That is only to say that it takes a number of listens before it all becomes clear, of course.

Similarly Jeremy's guitar work ranges from straight post-bop to the metallic fringes. I might have wished for a bit more of the latter because I like the way he has with it, but this is all about diversity. He is most definitely a good player well worth hearing. Diamond People covers so many bases that in the end you get how all-encompassing he is as writer and player. A promising musical voice can be heard at length. Take a listen!