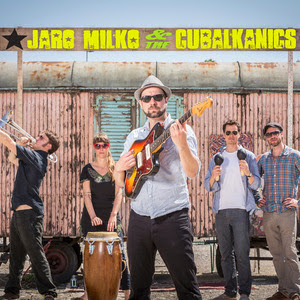 Is there such a thing as punkish Latin? Not that I am expressly aware of. But if there could be such a thing, Jaro Milko & the Cubalkanics come close to it on their humorously titled album Cigarros Explosivos. It's a band from Switzerland playing an enigmatic but infectious blend of Cuban son, rock and a bit of Gypsy swagger.

Jaro's guitar is out front and electric in ways that suggest Santana without actually channeling the Carlos way. Jaro goes where he hears it but there is hardness and strength that the Latin rhythms underpin and make for the urge to move your feet. Plus oddly enough there is a psychedelic surf element there, too. But if it works, and it does, who is to judge what belongs together? The artists do ideally. And they do here, certainly.

Instead of bass guitar the trombonist lays down bass lines with an octave divider, as I understand it. It makes things slightly different underneath but the percussion and keys make it all seem inevitable.

The tunes are varied and cool. If you are looking for "true Latin" this is a bit beyond that. They go their own way. If you let loose your expectations, that ceases to become an issue. So relax and let the music do its quirky thing.