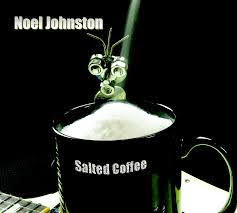 There are some albums you put on for the first time and...Wham! From the first couple of notes on you just know there are some heavy doings in store. And then the album lives up to it.

That's pretty much how I felt from the first moments of hearing guitarist Noel Johnston and his album Salted Coffee (Armored Records 8039). This is highly charged, highly electric fuse-metal that hits hard and has smarts too.

Noel Johnston shows himself an exciting, blazing electric guitarist here with an overdriven sound, some pretty amazing line building chops when he is nailing it and an overall feel that drives you out of your seat, I suppose you could say. He's joined by game power trio members Jason "JT" Thomas on drums and Jeff Plant on bass, both right there where they should be. Shaun Martin and Greg Beck guest on keys and percussion, respectively, for a couple of tracks, but otherwise it's just the trio hard at work.

Noel has some really good ideas and he puts them across--like turning Joe Henderson's "Inner Urge" into metal. And it happens! There are lots of nice tunes Noel wrote and they set up the trio and the guitar coolness with a flair.

He is different enough that he doesn't sound like he is channeling anybody as much as recreating the advanced metal thing and driving it into his own orbit. He comes up with power chords that are refreshing and unexpected and he lines with very musical results.

So that's it. This is one for metal heads who want something further, who are sick of the cliches and would welcome a fresh set of ideas. That's what you get here!